In recent years, the number of new chemical entities and screenable drug targets has increased rapidly, but only a few have succeeded. Due to the adverse biological consequences of drug metabolism and induced toxicity, more than 40% of marketed drug candidates were terminated. Early prediction of metabolism and its toxicity is an essential part of the drug development process. By developing in vitro models with better potential for drug toxicity screening and prediction, the pharmacokinetics/pharmacodynamics (PK-PD) and biological activities of potential new compounds can be predicted more accurately.

Conventional static 2D cell culture includes Petri dishes, well plates, and cell culture flasks. Although they are very powerful tools for rapid and high-throughput screening of one or more parameters, they have the following disadvantages:

Microfluidics has the following advantages: low reagent consumption, easy control, rapid analysis, miniaturization, high integration, and high throughput. It is considered to be an excellent platform for cell-based assays, such as drug metabolism, cell interaction, etc. More importantly, the characterization of drug metabolism and cytotoxicity determination can be achieved on a single device, which will greatly speed up the drug development process.

Cytochrome P450 enzymes play a central role in drug metabolism, and more than 75% of human drug enzymatic reactions are catalyzed by them. Human liver microsomes (HLM) are commonly used as carriers for P450. Studies have shown that HLM may be trapped in biocompatible materials. In the 3D microenvironment, higher levels of cell-specific functions can be better retained, which makes the experimental results more reliable and accurate. 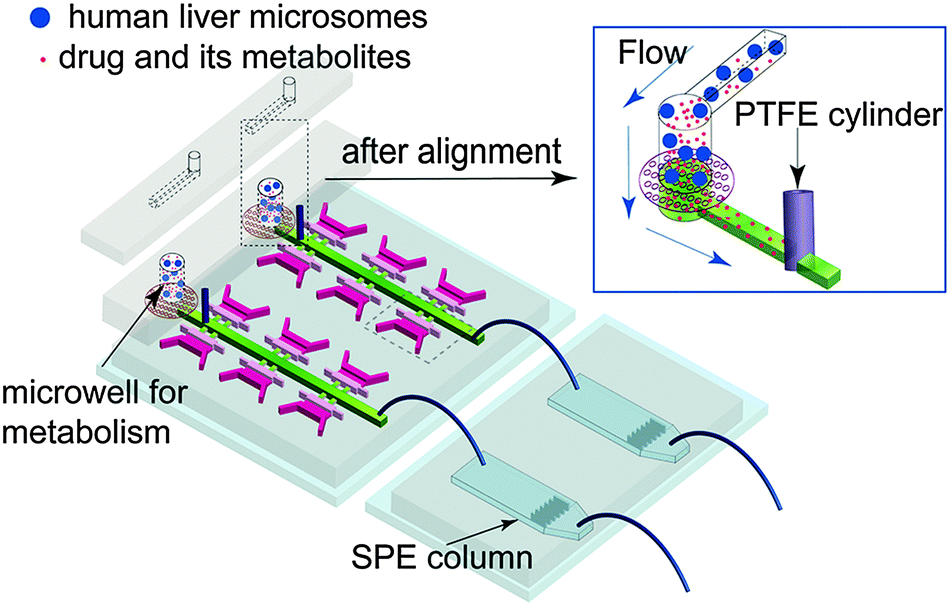 The part containing the micropores is sandwiched between the upper PDMS plate and the PC membrane with a diameter of 0.4 μm for loading HLM. The second part consists of the main channel, a cell culture chamber, and a medium channel connected to a lower height channel for 3D cell culture and drug stimulation. The third part is the integrated micro solid-phase extraction (SPE) channel for sample purification and concentration before mass spectrometry analysis. Using this device can obtain the ability to test drug metabolism and cytotoxicity determination in the same experiment.

In vitro models are essential for screening the absorption, distribution, metabolism, excretion, and toxicity of new formulations. Only a small part of the drugs that showed appropriate ADME toxicity behavior and moved to the next phase of testing eventually appeared on the market. The reason for the failure may be due to the insufficient ability of preclinical in vitro models and animal tests to predict the toxicity levels of new compounds. Therefore, more complex in vitro models of organs affected by drugs is needed, such as the liver.

Fig.2 The microfluidic live-proximal tubule two-organ-chip. (A) Expanded view of the device comprising the PDMS-glass chip. (B) The experimental setup of cocultivation of liver microtissues and renal proximal tubule barriers in the MOC. (Lin N, et al. 2020)

The important feature of the microfluidic tissue chip is the control of the microenvironment and the flow of nutrients and culture media, which can customize the biologically relevant environment according to the needs of the experiment. A liver-on-a-chip device is an excellent example of these microfluidic chips. In a monolithic liver, hepatocytes or co-cultures of hepatocytes and other types of cells in the liver are cultured under highly supervised conditions in a microfluidic chamber. The cells on the liver slice can then be exposed to various compounds and their response can be monitored in real-time.