DNA microarray is a standard technique for analyzing gene expression levels, including a series of microscopic spots that react with the genetic material in the sample to form double DNA strands. Generally, control and experimental samples are incubated on a microarray. Protein microarray is a powerful tool for studying proteomics, including a series of capture proteins that interact with the proteins in the sample and emit fluorescent signals normally, which can be read by a scanner. Cell microarray is a living cell system fixed on a solid substrate for simultaneous screening of multiple cells.

Microfluidics is related to control very small amounts of liquid in microchannels, which can be used to perform microarray assays and microarray patterning.

The channel size of the microfluidic chip is usually between a few microns to a few hundred microns, which can be filled with a very small amount of sample. This sample reduction reduces the cost of reagents and experiments.

In traditional microarray testing, samples are placed on a microarray slide and left for several hours for incubation. Hybridization is based on diffusion, which is inefficient and time-consuming. However, microfluidics solves this problem by using various methods to allow reagents to flow through the hybridization point, such as capillary flow, electrokinetic technology, or syringe/pressure pumps. 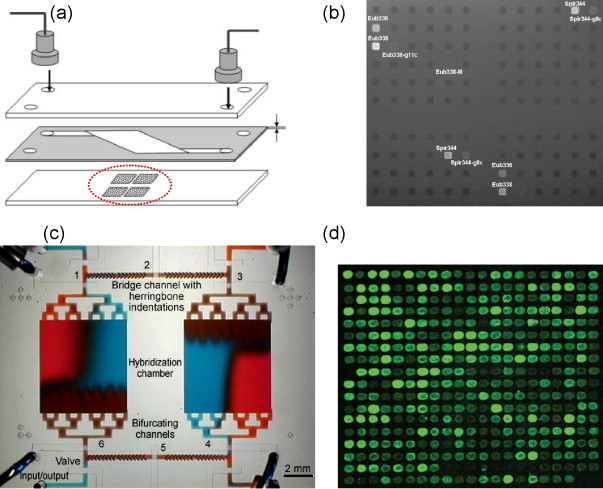 Fig.1 (a) Diagram for sample recirculation system on the hybridization chamber. (b) Hybridization image of fluorescence-labeled target nucleotide with 0.1 mL/min continuous recirculating flow on a DNA microarray for 40 min. (c) Chaotic mixing of the dye solutions in two PDMS microfluidic chambers facilitated by the herringbone indentations in the bridge channel. (d) Part of the fluorescence images of the hybridization experiments with the PDMS device on a 17 K microarray. (Wang L, et al. 2011)

Besides, in many cases, multiple tests need to be executed in parallel. Microfluidic devices can be easily connected in parallel to allow multiple samples to be tested at once or to allow each sample to be tested multiple times to ensure the validity of the results. Depending on the type of experiment and microarray, both linear and spiral microchannels can be used for microarray testing.

Since spot reagents and glass slides are exposed to the air, conventional low-density probe printing suffers from splashing and evaporation. Microfluidics is particularly advantageous for patterning low-density microarrays. A simple microfluidic technique can be used to print line arrays and overcome the above-mentioned problems.

The imprinted microchannel network in the polymer reversibly binds to the solid substrate. Next, the solution flows through these channels, thereby patterning the surface of the substrate. The microchannel can then be washed to clean unreacted reagents. Since the microchannels are separated, the risk of cross-contamination is reduced. Finally, the microchannels separate and leave the patterned substrate. In this method, the reagent flows in a narrow space and is not exposed to the air.

Another type of microfluidics used for low-density microarray printing is called the cross method or the micro-mosaic method. The pattern of the first array is similar to the linear array described above. Next, the microchannel will be sealed, another chip will be placed orthogonal to the first array, and the same process for patterning will be followed. This method is first used in immunoassays and then extended to DNA microarrays, which can form rectangular plaques on solid substrates, making them suitable for parallel hybridization.