The History of Microfluidics

The History of Microfluidics

Nowadays, microfluidics is a unique field of technology. However, its history can be traced back to the manufacturing of inkjet printers in the 1950s. These printers are based on microfluidic technology, which involves the use of very small ink-filled tubes for printing.

In 1970, a miniaturized gas chromatograph was realized on a silicon wafer. At the end of 1980, the first batch of microvalves and micro pumps based on silicon micromachining appeared. In the next few years, several silicon-based analysis systems were proposed. All the above examples represent microfluidic systems because they can accurately control the ever-decreasing fluid volume on the one hand, and on the other hand, minimize the size of the fluid handling system.

The Development of Microfluidics

Before microfluidics became an independent science, its history was closely related to several other fields, which contributed to its development by borrowing its methods and materials. For example, integrated circuits and photolithography were born before microfluidics, but they are often used to promote their development.

Since 1950, researchers' interest in designing miniaturized systems and components has increased day by day. Research began by miniaturizing sensors and other components and then integrating them with microcomputers to obtain a small-size integrated platform for use as environmental or medical monitors.

Stephen Terry of Stanford University did pioneering work. In 1970, he produced a micro gas chromatograph (GC) integrated on a silicon chip, consisting of a gas supply device, a sampling system, a capillary column, and a small thermal conductivity detector. This device is considered to be one of the first examples of "lab-on-a-chip".

Key Factors in The Manufacturing Stage

Another important contribution is the development of soft lithography in PDMS as a method for manufacturing prototype devices and testing new ideas.

Since the late 1980s, researchers are looking for an inexpensive technology that can pattern 3D structures to control surface chemistry and can be used on a wider range of materials. Therefore, soft lithography technology was born. Compared with photolithography, the main difference is that elastic molds can be used instead of rigid photomasks to transfer patterns, and various materials can be directly patterned. Some of the most famous soft lithography technologies, such as replication molding (REM), micro-transfer molding (µT), microcontact printing (µCT), and capillary micro-molding (MIMIC), have become very successful microfabrication technologies in microfluidics. 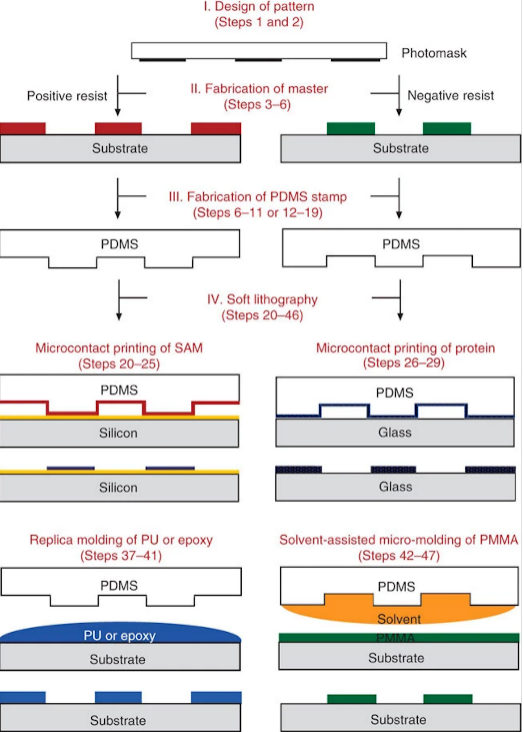 The first type of microfluidic device is usually made of silicon and glass. However, these materials have some problems such as high price, opacity, and low air permeability, which make them unsuitable for microfluidic technology applied to biology. In 1990, George Whitesides of Harvard University introduced a new concept of low-cost microfluidics by using polydimethylsiloxane (PDMS) as a new material for rapid prototyping of microchips.

Microfluidics, A Technology That Is Just Getting Started

Microfluidics provides revolutionary new functions. It is still a fairly new technology and requires a lot of work.

In the near future, there will be more microfluidic applications to analyze various molecules such as DNA, protein, and bacteria more accurate, or perform accurate analysis on the scale of a single cell. The continuous development of high-throughput screening and organ-on-a-chip technology will lead to faster and better drug development. With the development of on-chip laboratories and microTAS, new diagnostic products will become cheaper and faster.

The development of microfluidic technology has just begun!